A PIECE OF GERMANY 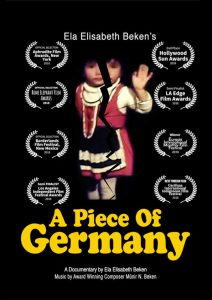 A Piece of Germany is a poetic documentary film. It is the story of love towards a long-left homeland. It is about family, friends, home, culture, identity, and “liminality.” It’s about children who unwillingly left their country of birth and since then have been existing in-between in a third culture. The director Ela Elisabeth Beken unlocks the inner dynamics of history to see through the children’s eyes and feel through the children’s hearts. A Piece of Germany envisions a peaceful world where people get along well in peace and friendship regardless of their religion or skin color.

A Piece of Germany goes back in time and depicts a period in history when the Turkish guest workers in Germany and their German hosts were close friends and when religion and nationality did not seem to matter as much. We learn that at that time people were interested in each other’s lives. The immigrants with their “born in Germany” babies were celebrating Christmas holidays, birthdays, and other feasts with their German friends and together they were happy like in fairytales. This went on until the early 1980s when the economic and social conditions changed dramatically.

In 1984, especially with the “Return Assistance Act (Rückkehrhilfegesetz) program by the German government, many Turkish immigrants packed everything up and went back to their country of origin with their German-born children. While the parents were happy to go back home, their German children were leaving the only home they have ever known. These children forever lost their friends, their school, their playground and everything else that was meaningful to them. Children left Germany permanently because their parents accepted 10,500 DM for themselves and an additional 1,500 DM for each child; and in return, they signed a contract which forfeited all of their children’s rights to live in Germany ever again. Although they always considered Germany as their home, however, the decision-making process completely bypassed the children.

In A Piece of Germany, the director Ela Elisabeth Beken embarks upon a journey, 27 years later, to find the immigrant children whose parents made this irreversible decision and took the money—effectively tearing their children forever from the only life they had ever known. Ela uncovers the subtle dynamics by probing into the hidden innermost feelings of the children and their parents and develops an incredible story of dreams, survival, ambition, bigotry, and humanity. Today the parents who made the decision on behalf of their children confess that they regret their decision back then and they feel heartache and longing for their home in Germany.

Despite the separation, it turns out, A Piece of Germany is a love story—the children’s pure, innocent, immortal and unconditional love of Germany that they have kept in their hearts for 27 years with no resentment. 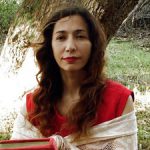 She studied film production in Munich/Germany and, for over ten years, she worked for some of Germany’s most important TV network channels like Pro Sieben, SAT1, Kabel 1, and Rtl2. Ela has broadcast the news, various television shows, blockbuster movies, live shows and magazines, as well as live sports events such as FIFA World Cup Soccer games and UEFA Champions League games in Germany, Switzerland, and Austria.

She also studied acting for film and theater in Munich at the International School for Acting for Film and Theater. Her earlier work as an actress was produced mainly in Germany. She is known for her supporting role in the Christmas movie Zimtstern (2010) , as well as Jetzt Wirds Ernst (2010), Akte XY (2005), Hausmeisterkrause (2005), and Garden of Love (2002). She played a leading role in the theatrical production of Otello Project. In addition, Ms. Beken has studied with Ulli Lommel (1944-2017), the renowned German cult actor, director, and producer. Ulli Lommel, who is known for his cult movies and collaborations with such luminaries as Andy Warhol and Rainer Werner Fassbinder, became a mentor and has deeply influenced Ela Elisabeth Beken as an artist, filmmaker, and a human being.

Ms. Beken has been collaborating with the Bavarian director/producer Rudiger Nuchtern on several projects. She is the author of Gang Bang Sisters, a novel about street children in Munich which she wrote after a long research on the streets of Munich under Rudiger Nuchtern’s guidance. Ela Elisabeth Beken wrote the screenplay for the 2010 film Jetzt Wirds Ernst. This film was inspired by a year-long social project of acting and film-making with the ghetto children of Munich. With the Ministry of Culture’s support, it was directed by Rüdiger Nüchtern and produced by Berg Film. Ms. Beken was the screenplay writer, assistant director and actress for the movie Jetzt Wirds Ernst.

In the US, Ela Elisabeth Beken has studied film in Los Angeles with Professor Dr. Josh Kanin, an American film editor and the son of the award-winning screenwriters Michael Kanin and Fay Kanin. Currently, she has been working on several projects—including a documentary film about the international cellist Yo-Yo Ma, another documentary film about the life and work of the Swiss photographer Jacqueline Peyer, a screenplay of a fiction movie based on her A Piece of Germany, and another screenplay of her novel Gang Bang Sisters.

Her documentary film A Piece of Germany represents Ms. Beken’s debut as a director of a future length film.

A while ago, my five-year-old son’s best friend from school here in Los Angeles—also his soccer buddy—was suddenly facing deportation to Mexico, the country of origin of his parents. One night, when I was putting my son to sleep, as he was lying in bed, he said: “I wish my friend could stay here so we could always play soccer.” I saw in his eyes that he was scared that he might lose his friend forever. This reminded me of my own childhood. I remembered how I was torn apart from my home in Germany. I was born in Munich and Germany was always the only home I have ever known. So, when my parents took me as an eight-year-old-girl to live in Turkey, I was taken away from my only home in Germany. I immediately realized that what I had to go through back then was still an issue today as it was so many years ago. Indeed, we still deal with these lingering questions of “where someone belongs” or “where someone’s real home is” as so many people have to leave their country of origin for all sorts of reasons.

Today, I think, A Piece of Germany, is more relevant than ever before. It depicts the story of me and some other individuals who were also taken away from their homes in Germany in 1984. In this context, the film seeks to examine the universal questions of home and other surrounding issues. Thus, it also resonates with many children of immigrants from other countries. Today, a Victoria from Los Angeles or a Mohammad from Paris may experience a similar fear like I felt in 1984 when so many Turkish immigrant children were taken to their parent’s country of origin. Today, in the year of 2018, the climate of 1984 is upon us once again.

When I realized that the time has changed but people’s stories were the same, I wanted to understand what happened in 1984 even more than ever before. I wanted to find out what happened to the children. How these 1984 children felt when they had to leave their home and how they feel today. I wanted to know the reasons why their parents decided the way they did. In the course of my investigation, I found that what happened in 1984 was studied up to a certain extent, but what was missing in all that was the story of the powerless children who were deeply affected by all this.

With that in mind, I started my initial research in Germany and talked with some experts. Then I have traveled to Turkey and gone from city to city and looked for the others who were just like me. When I found them, they all seemed to be moved by that somebody was actually interested in what happened and their feelings about moving to Turkey. They were separated from their homes and after all these years nobody knocked on their doors and asked how they were doing. In A Piece of Germany, the audience will be given an opportunity to come close to these children’s lives. The audience will witness the children’s inner most feelings, fears and perhaps be astonished by the still hidden and deeply buried love of their true home—Germany.

Today I live in Los Angeles with millions of other immigrants. I have an immigrant husband and two children. My children were both born here. Now I accept that America is the only home for my children; they are Americans.

Making of this film taught me that when we know what history does to real people, only then we might have a chance to change things for the better; only then we can change our world into a positive one.