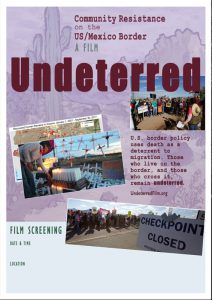 Undeterred tells the story of the build up of enforcement along the US/ Mexico border, how it has affected and changed life in one small town and how local residents have organized to push back and resist those changes. 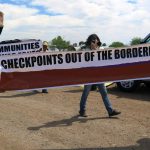 Eva Lewis is an independent media maker based in southern Arizona. Since 2006, she has lived and worked creating media in many conflict and post-conflict zones. She spent time working in independent media in rural El Salvador, Colombia, and the Gaza Strip. She worked in New York City as staff person for the grassroots media network Deep Dish TV and at the independent news program Democracy Now! She is a member of the NY based video collective Paper Tiger TV and the Tucson based video collective Pan Left Productions. For the past six years she has been based in Arivaca, AZ, a community on the U.S./Mexico border, where she is involved in local struggles to provide crisis relief and organize for border demilitarization.

My name is Eva Lewis and I am the producer and director of UNDETERRED. I am an independent artist, journalist, media maker and storyteller. I have long been interested in the intersections between art, immigration and militarism.

In 2013, I moved to Arivaca, Arizona, the border community in the heart of the Sonoran Desert, that is the subject of UNDETERRED. The desert is awe-inspiring, beautiful and deadly. Men and women die every day attempting to cross it. When visiting the area, you are confronted at every turn with the ubiquitous military like presence of the Border Patrol. Having spent time in conflict zones, such as Colombia and the Gaza strip, where military occupation is an unchanging fact of life, I can honestly say that from my perspective, the US/ Mexico border is a low intensity war zone.

Living here is a daily struggle in reconciling the competing realities of small town life and the death and suffering of the border. Yet, the courage and humanity of Arivaca residents to resist the policies creating this suffering has inspired me and given me hope. I feel that my experience living and working in conflict zones, has given me the necessary background to tell the story of the border crisis in this town. In addition my relationship with the Arivaca community, built through living here, has given me an access to and understanding of this story that I believe to be unique. At every step of the way, the making of UNDETERRED has been a community effort, a story told about and through the collective process. The entire film was made in close collaboration with the community organizers who are its subjects.

Through this process I have tried to show not just images of protests and talking heads but the day-to-day shots that capture the texture of life for those most affected by conflict and militarism. The story of Arivaca is that of both a breathtaking and deadly landscape, inspiring community activism and tragic human suffering, the struggle for a just immigration policy and the encroachment of militarism into our lives and our collective psyche. The intent of this project is to document this through the art of film, to show the desert and the border for all their misery and beauty as well as their potential for transformation.