THE BOYS NEXT DOOR 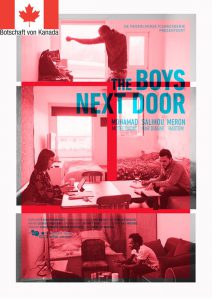 ‘Startblok’ is a housing project where Dutch youngsters live together with refugees. Director Bobbie lives in a hallway with Motee from Syria, Meron from Eritrea and Salihou from Senegal. In this film, Bobbie examines how they can live together despite all the cultural differences. This is not always easy.

The film tells the stories of people who have fled and whose path lead them to a emergency accommodation of a small community in Münsterland in 2015. It’ll take several months until they’ll be able to finally start a new life in Germany.
Without the use of a commentary, the film shows all the spontaneous moments, the motives of escape, the difficulties and moments of happiness, attachment to one’s homeland, Fears, despair and acceptance of destiny, encounters, impatience and gratitude, giving the people who came to us an authentic
Voice.

When Bobbie was part of the DOCU Youth Jury during IDFA 2011 an irreversible love for documentary storytelling emerged. Her first own documentary followed soon: Welcome to Holland (2013). This short documentary follows the lives of Akhrat and Yasir, two children living in refugee camps in the Netherlands, dreaming about a safe future in the Netherlands. With this film Bobbie got accepted at the Netherlands Film Academy. In her third year in film school she made the film The Big Brainwash (2016), a film about 8 young children growing up in a world full of screaming pink and blue toys. With her graduation film The Boys Next Door (2017), a story about idealism, cultural differences and integration, she returns to the same subject as in her first film. In the future Bobbie would like to keep making films which tell the social stories of this time.

It’s been four years since I met a refugee for the first time. He was seventeen years old, and his story made me painfully aware of my own safe childhood. This encounter has put a lot into motion for me. Yasir became one of the main characters for my very first film ‘Welcome to Holland’, a film which got me accepted in the Netherlands Film Academy. Four years later I return to the same subject, because the issues still occupy my mind.

In a time where the refugee crisis is a central topic in the media, I decided I wanted to be a part of the solution rather than the problem. So I moved to Startblok, full of naive ideals. This had to be a film. It wasn’t only the beginning of a very personal adventure, it also became the kickoff for a new integration policy by the municipality of Amsterdam. Taking that in mind, it was important for me to stay close to myself, but also make room for the perspective from my new neighbours. To achieve that I choose to film several scenes which perfectly represent the daily interaction between the different cultures and languages.

Sometimes reality at Startblok turned out to be more difficult than I could have imagined and cultural differences seemed irreconcilable. But in the end those moments especially reminded me about how important it is to keep on trying. With my personal search in this film I hope to inspire people to think about what is necessary to achieve integration. Can we build a society in which there is place for everyone?